​If the printing press is the first revolution in the technology of the book, the Internet is the second. After 500 years of dominance, print culture has been disrupted and reshaped by 25 years of technological change and innovation. E-books and e-readers are just the tip of the iceberg. The entire ecosystem of print culture has been realigned around emerging, Web-based technologies.

Sometimes these changes are almost invisible to readers. The print production process, for example, was digitized beginning in the 1980s. Page layout and design, typography, and printing have all been reengineered to take advantage of new efficiencies and processes unlocked by tools like Adobe InDesign and PDF. Major publishing companies have restructured, and restructured again. The technology and economics of book publishing continue to be disrupted and reorganized on an ongoing basis. The output—printed books—may look the same to readers, but the process by which they have been made has been radically transformed, both in terms of technology and in terms of commerce and the economics of book publishing.

Many changes are more visible. E-books and e-readers became popular and widely adopted following the commercial launch of the Amazon Kindle, Apple iPad, and other tablet devices around 2007. The world of digital publishing has exploded into many forms, including blogs, podcasts, vodcasts (video podcasts), and other long-form Web-based genres and platforms. Social media and so-called Web 2.0 technologies, beginning around 2005, opened up the world of Internet publishing to literally anyone.

What do these changes mean for the present and future of the book? How does reading and writing change? Do new technologies open up the publishing process, giving everyone a voice? Or do large corporations like Apple, Amazon, and Google take control in ever more imposing ways?

These are a few of the questions we will explore in this unit. Disruption focuses primarily on the years from the early 1990s to the present, and it looks at the Internet, World Wide Web, and related technologies. In the following unit, Transformation, we will look specifically at mobile devices and the possible future(s) of the book. Disruption is our chance to assess the changes over the last two decades and to reflect on where we are now.

Visual Map: The Ecosystem of the Book

This graphic, created using MindNode, offers one possible model of the ecosystem of the book. Each of the nodes on this map suggests a possible focus for a research project.

The Video, "Reshaping the Ecosystem," provides a walk-through of this visual map and explains how it can be used to generate questions about the impact of digital technology on print culture. 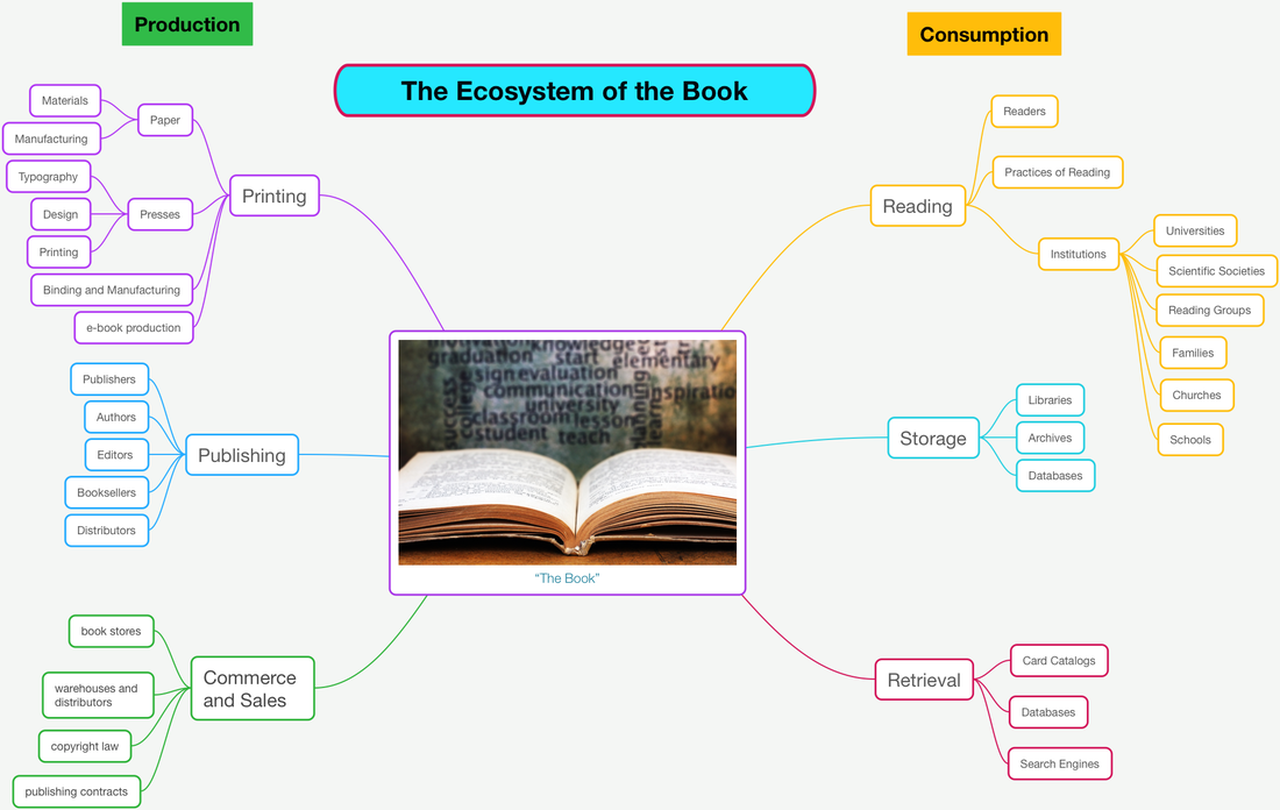